What will the neighbours think?

Posted on May 7, 2011 by bloomingreverend

Now home from the convent (but not before watching the nuns chase the geese across the lawn while madly barking and clapping. That was hilarious.) I am ready to begin the next adventure. And what an adventure it is!

Over a week ago, I did something I had never

done before: I went shopping for lumber. With the seats out of the van, Greg (the really helpful guy at Rona) helped me load a ton of 8 foot 2×4’s and 2×6’s into the back. I drove them to my father-in-law’s house and unloaded them into his driveway. Magically, they were transformed into what would be the sides of my new vegetable gardens! 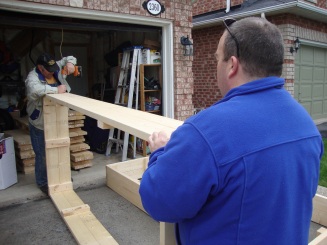 This morning, he (Clarence) arrived with deck screws and a drill and spent 3 hours putting the sides together and installing them. They are so beautifully made. I am so wonderfully blessed to have his help!

The dump truck arrived with nine–yes, nine!–yards of triple mix. An entire dump truck full! And we set to filling up the beds with dark, friable earth.

These are no ordinary vegetable plots, though, because they have been installed in the front yard. They are clean and tidy and perfectly lined up (Clarence made me wish I had done a better job learning high school math). They are in full sun, which is a hot commodity on our property. But they are certainly a departure from the usual suburban lawn.

When the kids got home from school, they were a great help. That was alot of dirt to move in one day. Whew!

I am confident that I am part of a growing front yard gardening movement in North America. Still, I have been apprehensive about what the neighbours would think. So it was a bit of a surprise that neighbours came bounding over this afternoon, telling us that they were THRILLED with our new gardens. They gushed about what a great idea it is, and told us about the tomatoes they grow in their backyard. Maybe they would try a front yard garden, too, they said!

Next a woman came by with her son, introducing herself and asking what I was going to grow–she thought that zucchini was a good bet from her own experience. And so many people slowed down to look at what we were doing, we thought there would be an accident. There’s no turning back now.

This entry was posted in Uncategorized and tagged garden, landscaping, neighbourhood. Bookmark the permalink.

4 Responses to What will the neighbours think?