At least they left one good thing

Moving from Strathroy to Oakville was challenging. Living close to the church was very important to us, because this way we could be engaged in the same community as the congregation and available at a moment’s notice. The problem was that we were going from a small town to a booming real estate market. Houses sold in what felt like minutes, making it difficult to buy something affordable, especially from several hours away. And we were in a hurry so that we could move before school started in September! 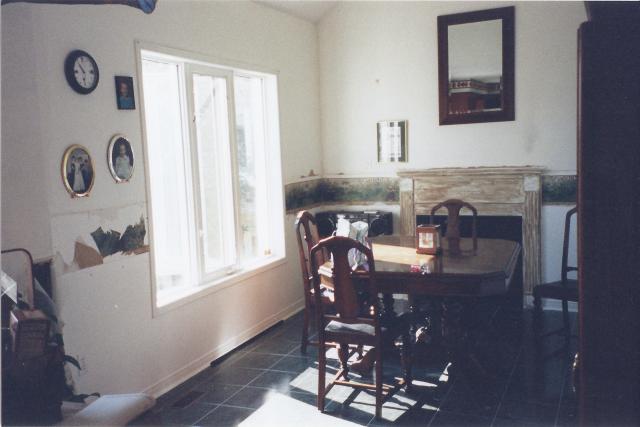 We had a great realtor who helped us, and we eventually found a small home near the church that was just 6 years old. The only problem was that the people who lived here before us were…a little unusual. A decorator who saw the inside called it, “a craft project gone wrong”. In our bedroom there were 18 colours on the walls, painted with small craft brushes. In the basement, an electrician told us the entire floor was wired with speaker wire and turning the lights on might set the house on fire. The fireplace mantle had brown shoe polish smudged all over it (were they going for an antique finish?). The bathrooms were so dirty a woman who helped us when we moved in said they had not been cleaned. Ever.

The yard was no different. They had planted a million things, but never amended the soil, leaving them to die in hard, dry red-clay soil. They put in a large pond with a rigid plastic liner, and then left it abandoned to grow a big mess of algae. We had to remove dozens of shrubs and trees of varying sizes (plus 2 dumpsters full of junk from the house), more than 30 ‘Nooma’ night lights that were badly installed and mostly not working, and as well as a light-up plastic Santa from under the back deck. There were so many mismatched rocks and bricks that we put them all on the front lawn and told our neighbours to take them if they could use them. Thankfully, they all disappeared.

Still, I was thankful this week for something that those previous owners left behind: a red currant bush. It’s tucked in at the side of the house and although it gets a fair bit of shade, it doesn’t seem to mind. I have done very little to it over the years except mulch it and keep the weeds at bay. When I think of how much trouble they caused us and how much mess they left us, I am grateful for even small mercies like this one.

This year the currant bush is loaded with berries and the girls and I spent ages picking them. It was quite lovely to sit in the shade and chat, slowly filling our plastic containers. Emily liked to spend her time hunched over the bowl removing every tiny stem–painstaking work that Sydney and I were happy to have her do.

For the first time, the white currant bush I planted next to it had berries on it, too. It may not give us enough to make a whole batch of jelly, but I’m sure I’ll be able to find a few extras at a farmer’s market or farm nearby. And in the mean time, Sydney had great fun creating an ‘art attack’ with the two colours!

I love red currant jelly. The only thing I ever use it for, however, is a recipe that I got from an old Upper Canada College cookbook. If you are picking red currants this year, or if you can find red currant jelly in a store (black currant is not a good substitute) you might enjoy trying it. Here it is:

salt and pepper to taste

2. Rub tenderloins with dry mustard. Season with salt and pepper.

3. In a  skillet, brown tenderloins in 2 tbsp of the butter. Sprinkle with rosemary. Spread with butter and jelly.

5. Mix flour with cream and pour over tenderloin. Continue baking for 10 minutes more. Transfer tenderloins to serving platter. Spoon cream sauce over them and serve with rice.