Posted on August 8, 2011 by bloomingreverend 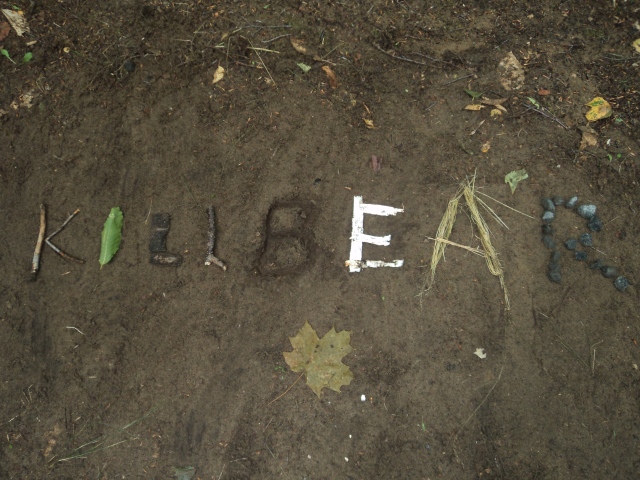 Our family just returned from a few days in Killbear Provincial Park. We had never camped there before and had a little trouble finding a suitable site. In the end, we  found a spot in one of the small campgrounds with only about 50 sites. It had a sandy beach and was radio-free. Our site in particular was quiet, since it backed onto a wooded area.

After we pulled in, we began to unpack and set up tents. This is no small task with six people. We debated where the flattest ground was, organized sleeping bags and pillows, unearthed the camp stove and dishes from our boxes. There was alot of “Hey can you hand me a….” and “Have you seen the…?” And of course the ever constant, “Stop fighting and get to work!”.

Then, all of a sudden, we noticed a visitor–or, rather three visitors. Just a stone’s throw from our campsite, a doe and her two fawns wandered into view.

We were instantly captivated. We stood still. All of our work stopped. Someone whispered, did we have a camera? We fumbled in pockets until we found one but we were so busy watching the deer nibble on bits of green leaves that we didn’t do a very good job taking pictures. Most of them are blurry.

As I stood there, frozen in place, admiring the sleek golden flesh of these lovely creatures, I began to be amazed not just at the deer themselves but at their power over us. They halted our movements and stopped our conversation. They drew our gaze and held it for a long time. They prompted us to stop our work and sigh deeply over exquisite beauty. Very few things can do that.

That realization filled me with gratitude. It was not just that we had seen a deer, although the kids were over the moon about that. It wasn’t just that we had a campsite so quiet and remote that gentle wildlife would come to visit. We had been blessed by an unexpected moment of pause in the middle of our crazy, setting-up chaos. We were taken out of the mundane and into a moment filled with delight and awe. Oh deer, indeed.

After the mother and her two little ones wandered off again, we returned to our work with fresh energy and enthusiasm. We were buzzing with excitement and kept saying, “Wow–that was SO amazing!” Such euporia left me hoping that another moment like that might come upon me again someday. I have no real ability to create such a thing, of course. All I can do is keep an eye out for it and recieve it when it comes. And after that deer episode, my eyes are peeled.

This entry was posted in Uncategorized and tagged inspiration, nature, rest. Bookmark the permalink.