Posted on August 28, 2011 by bloomingreverend

I started taking piano lessons when I was seven. Mrs. Luffman was my teacher’s name, and she was a sharp and demanding woman that I came to quite dislike. That wasn’t the only challenge I faced as a new piano student, however. Not only did I come from a family without any musicality (I don’t count the fact that my father liked the Bay City Rollers) but our home didn’t actually have a piano in it.

Thankfully, my mother was a church secretary, and several days a week she would dutifully drive me over to Weston Presbyterian so that I could play “Here we go, up a row” and Leila Fletcher favourites. My grandmother took pity on me a few years later and furnished our home with its very first piano, an old Mason & Ritch with dark stain and bench that opened up to store music books. 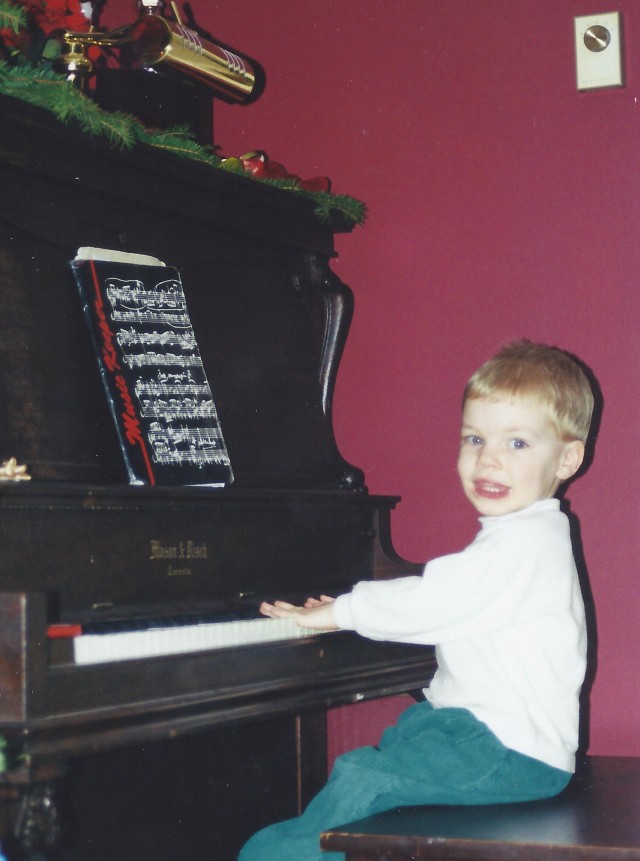 I would go on to studymusic at McMaster University for four years. I decided to move that piano into the student house I shared with five others (it was supposed to make me practice more, but didn’t, as I recall). When I graduated, that poor piano moved back to my parents’ place again.

The old Mason & Ritch would travel a few more miles yet. Although by then I had given up playing altogether, we moved it out to Strathroy with us when we moved. By the time we moved it to the house we purchased in town, our children had begun to play around on it. Then I took the call to Trafalgar PC in Oakville and once again, the piano was lugged onto a truck and off again into a new living room.

Not long after, my father called. He had a piano for us, he said–an old family piano that had belonged to my great uncle John Gilbank. Did we want it? Since it was a much nicer instrument, we found a new home for our old one–a young boy we knew had started taking lessons but the family had no piano of their own– and took delivery of a lovely Bell piano, made in Guelph, Ontario in 1900.

Alas, despite the efforts of an excellent piano tuner, it always remained a half tone flat. It turned out to be a lovely piece of furniture, but lousy for accompanying my children who were by now learning to play the violin. We kept it anyway–it was a family heirlom, after all.

Then my children–who have  more musical talent than I ever did–began bringing home other instruments. Now we not only have that giant piano, but a viola, flute, french horn, trombone, tuba (!), cello, alto saxophone, bagpipes and two violins (this week S. also borrowed an electric bass guitar). This summer we decided that something had to go.

I asked my family–did anyone want the piano? No one showed the slightest interest. So this afternoon, I met with a nice guy who wants to buy my piano as a wedding gift for his fiancee. He’s going to pick it up on Friday.

Although I am sad to say goodbye to such a lovely piece of my heritage, I know this is the right thing to do. Even if I hung onto it for years until my children had homes of their own, they likely wouldn’t want it anyway. None of them plays the piano. It would be too big and of too little use as a musical instrument. Realistically, I will never live in a home where there is enough extra room for such a large piece of unusable furniture.

So I am focused on the fact that this change will create more space for my family’s life. We will purchase a smaller electric keyboard so that I can accompany them as they prepare for recitals, and so that they can have fun noodling around. There is now room for a new filing cabinet where we can organize the dozens of music books and pages of sheet music. There will be more space for us in our tiny living room.

There is little danger of my getting lost in sentimental thoughts, though. I asked my husband if he was sorry about the piano’s departure and he said yes. “We always kept the scotch on top of the piano,” he said. “Where are we going to keep it now?”

This entry was posted in Uncategorized and tagged family, life, memories. Bookmark the permalink.

2 Responses to Farewell, my piano friend