Everyone loves a parade

Posted on November 20, 2011 by bloomingreverend

As a child, I always wanted to be in the Santa Clause parade. I remember watching the big Toronto parade on television, fascinated with the clowns that seemed to be walking on their hands and the princesses with huge skirts that rolled along on wheels. I especially loved the floats, beautifully decorated and gliding down the street. I envied the pretty girls in pretty costumes, waving their mittened hands at the camera. How I wanted to be one of those girls!

Unfortunately, my parents were not keen on this Santa Clause parade idea. Desite the fact that we lived in a Toronto-area suburb, we never went to see one. My repeated requests to find out how a girl might get such a gig were carefully ignored. We saw some of the festivities on television, but no one besides me seemed terribly interested in watching it. 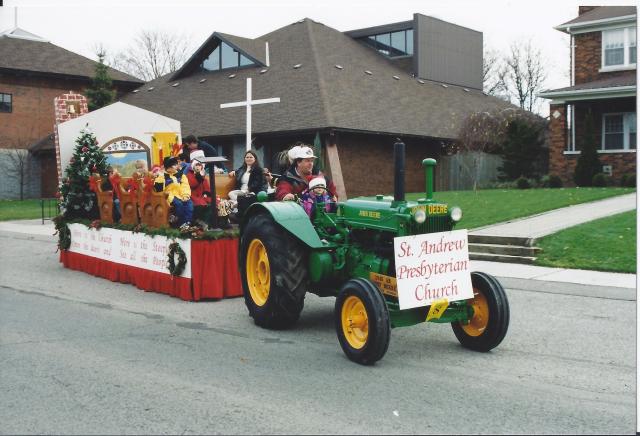 Then, in my first church, our congregation decided to enter a float in the town’s Santa Clause parade. Here was my chance! The theme was nursery rhymes (although what that has to do with Christmas still mystifies me) and there were some very enthusiastic people who got things rolling. We had a fantastic green tractor and flat bed trailer, and the perfect rhyme: Here is the church/here is the steeple/open the doors and see all the people!

We had small, curved pews that had been removed from the front of the church years before, and a lovely live Christmas tree. We would bundle up our children and sing some carols along the way, accompanied by guitar. A few santa hats would add to the fun. At last I had an opportunity to ride on a float and wave at the crowds!

I don’t know exactly how it happened, but it was decided that I would not ride the float that day. There was help needed to get the float organized and on its way, I suppose, and my younger infant daughter to tend to. No, I would simply be a spectator. I would line the streets with the town’s children and adults, bundled up against the cold winter air, and we would sip hot chocolate and cheer when our float came by instead.

Gone were my dreams of being a pretty girl in a pretty dress ushering in a new Christmas season. Alas, my longing for crowds of people waving and smiling and admiring me as I floated by would never come to be.

And yet I found that I was not disappointed. I delighted in watching my son and daughter–who were barely in kindergarten–sing carols and wave at the crowds.  I rejoiced in a community of faith who wanted to share the news of Christmas with the town and invite people to come and worship. I revelled in the fun of the parade, not wanting everyone to admire me, but wanting everyeone to see that churches are fun places, full of life and energy in a joy-filled season.

With that parade, I was released from my childhood fantasy. I no longer carried with me the feeling that I had missed some important part of Christmas. Instead, new memories were born, and they were about more than just pretty dresses. They were about family and community and proclaiming that Jesus makes Christmas a happy time.

That was a great parade.

2 Responses to Everyone loves a parade