Posted on May 6, 2014 by bloomingreverend

Having walked across the sands and up onto the road, I discovered a madhouse. There were dozens of cars, jam-packed into a car park, with hoards of people streaming onto the road into the village. For a place with a reputation of mystery and spirituality, this seemed a little bit odd!

I walked into the village and easily found the pub where I had reservations. They said they did indeed have my booking, but not until tomorrow. And no, they didn’t have room for me tonight. Ouch.

The two men tending the bar were quite sympathetic, however, when I explained how far I’d come and why I was there. They began to phone each place in town to ask about a vacancy for the night. Nothing. They even called an auntie who, they said, was eccentric but had a spare room. Still nothing.

I wasn’t sure what to do, so I sat down and had a pint of local beer. I texted my husband, who suggested I try the local churches. Perhaps a colleague might take me in? I began to consider whether I could manage a night outside if I bundled up. A local woman assured me there were no police to stop me, but it might be cold!

I visited St. Mary’s church by the priory ruins and found no one but tourists. In a quiet corner, I spent a good while praying. There was a service at 5:30 so I would come back then. I left and found a little church-turned-retreat centre called St. Cuthbert’s Centre where my classes would be held. There was no one there. I looked on the bulletin board and discovered the name and number of the minister. I dialed. She answered. I explained.

She came over in less than two minutes to tell me that the centre had a tiny little room off to the side with a bed and bath, called the Bothy. I was welcome to it, she said, and I burst into tears. She kindly showed me into an adorable and homey room with a chair and table, and stairs to a loft where there was a single bed and another chair. She brought me a few towels and gave me the keys. I was flooded with relief, and with gratitude. 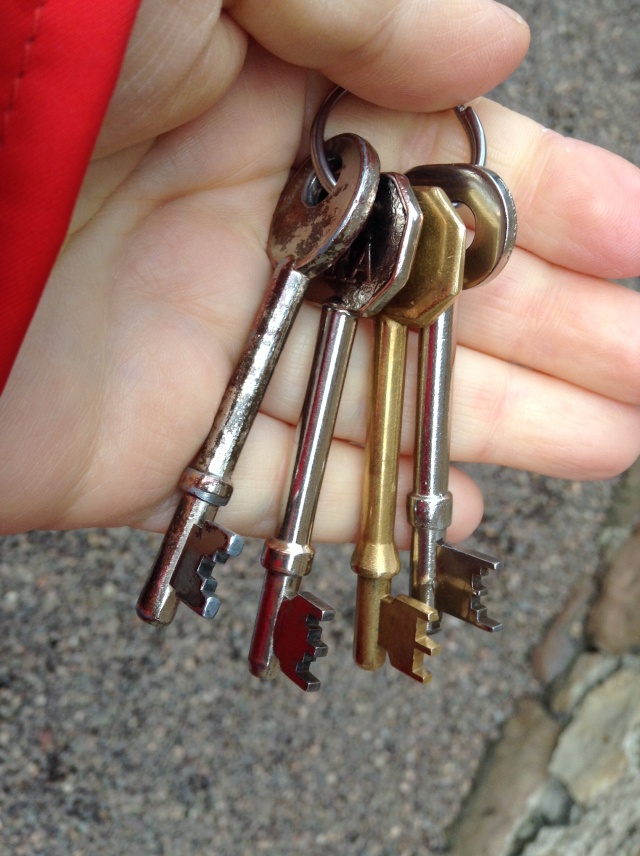 Not long after, I walked back and attended the evensong service, with two clergy and four worshipers, cold amid the stone walls and soaking in the beautiful evening prayers.

Supper at the Ship Inn was warm and filling (lamb shank and a pint of cider). I went back to my little haven, exhausted. As I lay in bed in the dark and quiet, I could hear gentle raindrops begin to fall.

His eye is on the sparrow, the hymn says. I don’t know about them, but I do know that God has his eye on me.

2 Responses to St. Cuthbert’s Way Day 7, Part 2: His eye is on the sparrow