Oh no! I killed the children’s plants.

Posted on May 8, 2015 by bloomingreverend

It hurts to  admit it but it’s true. Even after everything had started out so well…

I was super excited a few weeks ago when one of our Sunday School teachers announced that she was going to help her class create a butterfly garden. This would be accompanied by teaching about the butterfly as an Easter symbol of resurrection, as well as marvelling at God’s beautiful world and learning how to care for it. Amazing! I said. Let me know if you need anything!

Next, I spoke with this faithful teacher who said she had done a great deal of research on plants that attract and feed butterflies. She showed me the seeds she bought to start in pots: sunflowers, marigolds, and zinnias. There were other seeds that would be planted directly in the soil when the weather warmed up, she said. I gave her a little packet of yellow and orange cosmos seeds from my own garden. I was still excited. Everything was still good. 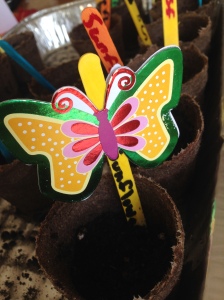 After church, this patient teacher stopped by my office. She had a large tray filled with pots, and each pot had a brightly coloured plant marker with the name of the seeds printed in children’s handwriting. Some of them even had big stick-on butterflies! As I admired them, she wondered if I could help her. Could I make sure they were watered every day? Of course! I said, full of enthusiasm.

I dutifully took the tray home. I smiled at them and watered them for a whole week. They were right there in my kitchen. I would never forget to water them if they are staring at me first thing in the morning. And it was true. I never did forget to water them.

I was so pleased when little tiny shoots appeared in those pretty little pots! Hurray! The kids would be thrilled! But now they were going to need more sunshine, and they would never get it sitting on the kitchen table in April. That’s not a problem for super-gardener! I picked them up, took them downstairs to my little greenhouse room (some people call it a bathroom) and put them on the shelf under the grow lights. Voila! Children’s seedlings coming right up!

That’s when it happened. In all of my super-ness, I neglected to turn the timer on for the lights. A week and a half later, I awoke out of a sound sleep and realized that those tiny little seedlings had been sitting in the dark the whole time. Gulp.

Sure enough, when I finally worked up the courage to go downstairs and look, there were tiny dead sprouts hanging over the edges of the pots. It was as if they had tried valiantly to prop themselves up while waiting for someone to come to their rescue. The children had planted their little seeds full of hope and happiness and I killed them. I was gutted.

Not one of us likes that feeling when we have not only failed ourself, but disappointed someone else. It’s embarassing. Anxiety-provoking. Awful. But what is there to do? Take a breath and assess the damage. Apologize. Figure out how to make amends.

The good news was that it was still springtime and the pots still had dirt in them. I dug around and found half a packet of sunflower seeds plus a recycled envelope with some Butterfly Weed (Asclepias tuberosa) seeds someone had given me. They are a favourite of monarchs, I’m told. A quick trip to the garden centre and I had marigold seeds, too. I planted them up. Watered them. And then moved them outside into real sunshine, just outside my kitchen door where I wouldn’t forget them.

Only a few hours later, I noticed that two tiny little sprouts had come back from the dead. Hallelujah! Now I just hope that the faithful, patient, wonderful Sunday school teacher and her students will forgive me, too.

This entry was posted in Uncategorized and tagged church, garden, life, seeds, Trafalgar. Bookmark the permalink.