Is it good luck to plant seeds while wearing your bathrobe?

Posted on March 18, 2016 by bloomingreverend

I have heard that you can ensure greater garden success by planting during certain phases of the moon (who knows? I can’t say I’ve tried it). This morning, however, when I was out in the early morning sunshine, I wondered what might. Perhaps planting seeds while wearing just the right outfit? Like my white, waffle-knit bathrobe? Maybe.

The truth is, I was just so darned glad to be upright and of sound mind that I didn’t care what I was wearing. It’s been a long winter full of too many bouts of ill health (one of the reasons for so few blog posts) and now that I am finally on the mend after a nasty bit of pneumonia, I am anxious to get the garden party started. Even in my pyjamas.

The great thing about having raised garden beds is that they warm up quickly in the spring. And while I may yet top them up with some compost or manure, all of them are ready to be planted now, in mid-March. So, after a strengthening cup of tea, I got out a few seed packets that advised planting, “as soon as the soil can be worked” and set to it. Go me! 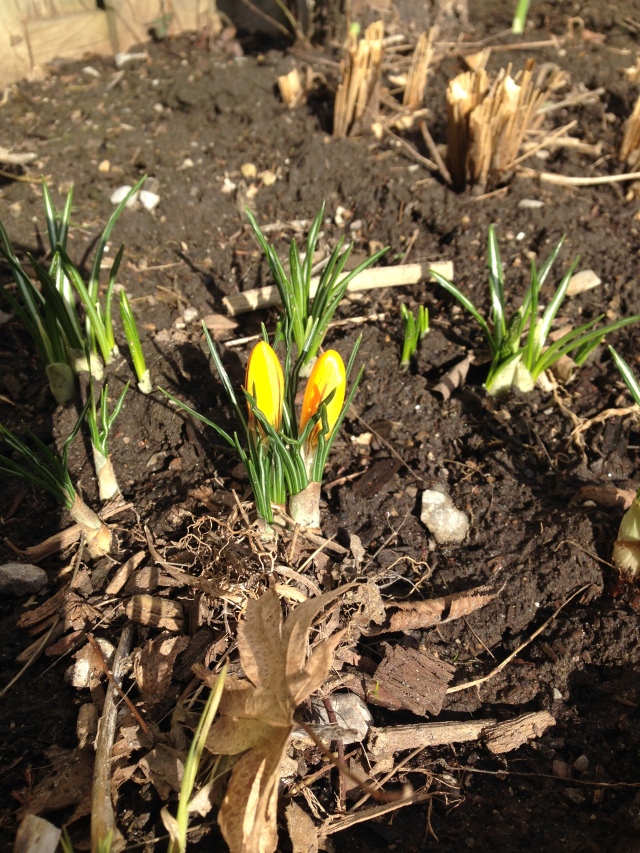 I have been anxious about planting a few things early: lettuce, so I can stop buying it at the grocery store; peas, because they need enough time to grow before the hot weather arrives; and spinach, because I am in a race with the dreaded leaf miners who will hatch in May and completely destroy all the leaves. Besides, every gardener spends the winter waiting for spring to arrive. And here it is!

It didn’t take much time to put a few rows of seeds in and cover them with a thin layer of soil. But I was out there long enough to notice the green daffodil shoots poking through the soil and see the first yellow crocus. I heard a cardinal singing to beat the band, as my grandmother would have said. I noticed that some of the parsley has made it through the winter. Even a little pot of chives was showing signs of life (I had meant to plant it in the fall but just never got around to it. Oops.)

I was probably outside a grand total of twenty minutes but I felt terrific when I came in. I was so glad I had seized the moment instead of stopping to put on pants first. Because then I would have seen the laundry that needed to be folded, noticed the dog’s empty bowl and gone running to answer the phone. I never would have made it outside at all.

It’s sort of like the child who showed up to church on a Sunday morning in a princess costume and a Dora wig. Sure, dressing up would have been nice, but if her mother had stopped to insist that she get changed they might never have made it at all. I was just glad they showed up.

So that’s my thought for this spring: seize the moment! Whatever it is that you are longing to do, just do it: go for a walk, sit on the porch with a glass of wine, put a few seeds in the ground. Grab a few minutes in between all the other things going on in your life to enjoy this fresh, new season. Even in your bathrobe.

This entry was posted in Uncategorized and tagged backyard, garden, life, seasons. Bookmark the permalink.

8 Responses to Is it good luck to plant seeds while wearing your bathrobe?